Block after block of Victorian townhouses formerly stood in what is now Nashville’s Central Business District. The Italianate-style Savage House is the lone survivor of this type of building and one of only two pre-Civil War residential structures in downtown Nashville. The three-story dark red brick building now operates as a restaurant and special events venue known as The Standard Restaurant & Club. Believed to have been built c1850, the building was initially used as a residence. Mary Claiborne acquired the building before 1860 for use as an up-scale boarding house, and remained here until 1881. Julius Sax purchased the building as a residence, and by 1891 had leased it to The Standard Club, a prominent Jewish social club. It is believed that The Standard Club added the large ballroom and basement bowling alley at the rear of the building. Dr. Giles Christopher Savage, an ophthalmologist and medical professor at Vanderbilt University, and his family moved here and 1898. Dr. Savage used the house as an office, infirmary, and residence. His daughter, Kate Savage Zerfoss, also an ophthalmologist, began practicing here in 1930 and continued to use the building as her office until her retirement in 1975. In 1980, the building was purchased for use as a restaurant and bed-and-breakfast, along with a colorful music venue known as the Gaslight Lounge, which operated for more than twenty years. Several country music videos were shot on the property during this time. In 2005, the Smith family purchased the building, restoring it to its Victorian-era grandeur. 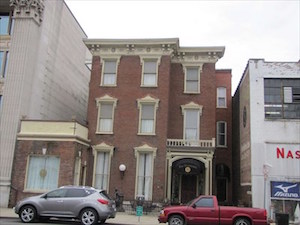