This part of the Printers Alley Historic District was known in the late nineteenth century as the Men’s Quarter because of the many saloons and gambling parlors located here. A woman who valued her reputation did not venture into this block. The Maxwell House Hotel (from which the coffee got its name) stood across the street at the corner of Fourth Avenue and Church Street until it burned on Christmas night, 1961. The reputation of the Men’s Quarter became so unsavory that the Maxwell House, which had its main entrance on Fourth Avenue, established a separate ladies’ entrance around the corner on Church Street. Two Men’s Quarter saloon buildings, though not the saloons themselves, survive on Fourth Avenue: the Climax at 210 Fourth Avenue North, and the Southern Turf at 212 Fourth Avenue North. The Italianate Utopia Hotel at 206 Fourth Avenue North was designed in 1891 by Hugh Cathcart Thompson, architect of the Ryman Auditorium. The ornate Victorian facades of these buildings stand in vibrant contrast to most of their contemporary neighbors. 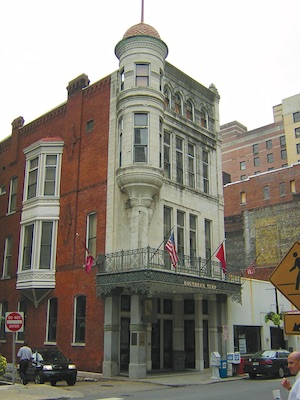