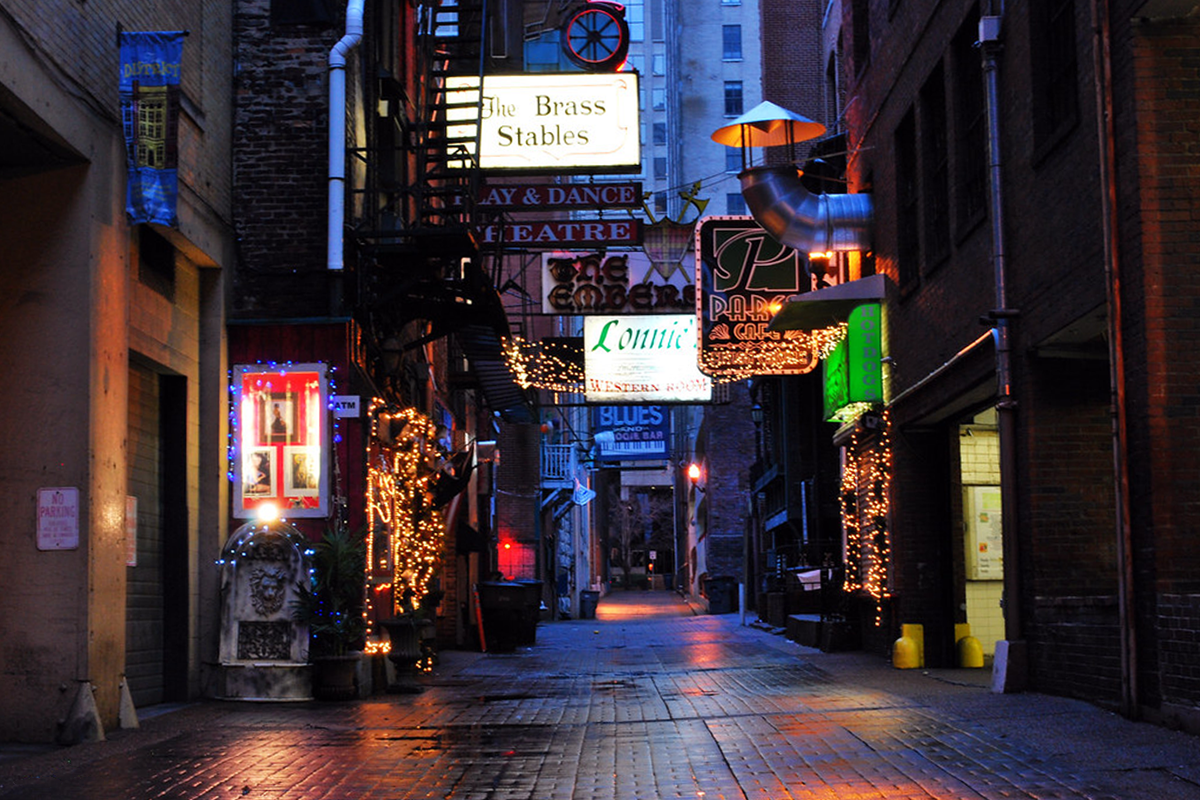 There are few places that boast as storied and lively a history as Printer’s Alley. Located between Third and Fourth Avenues and running from Union Street to Commerce Street, this small stretch was once the base of Nashville’s publishing industry, served as the city’s nightlife hub during and long after prohibition, and provided a launching point for many musical careers. Now, Printer’s Alley continues to thrive and grow as shops, bars, restaurants, and entertainment venues beckon to locals and tourists alike, offering a unique experience off the beaten path of Lower Broadway. 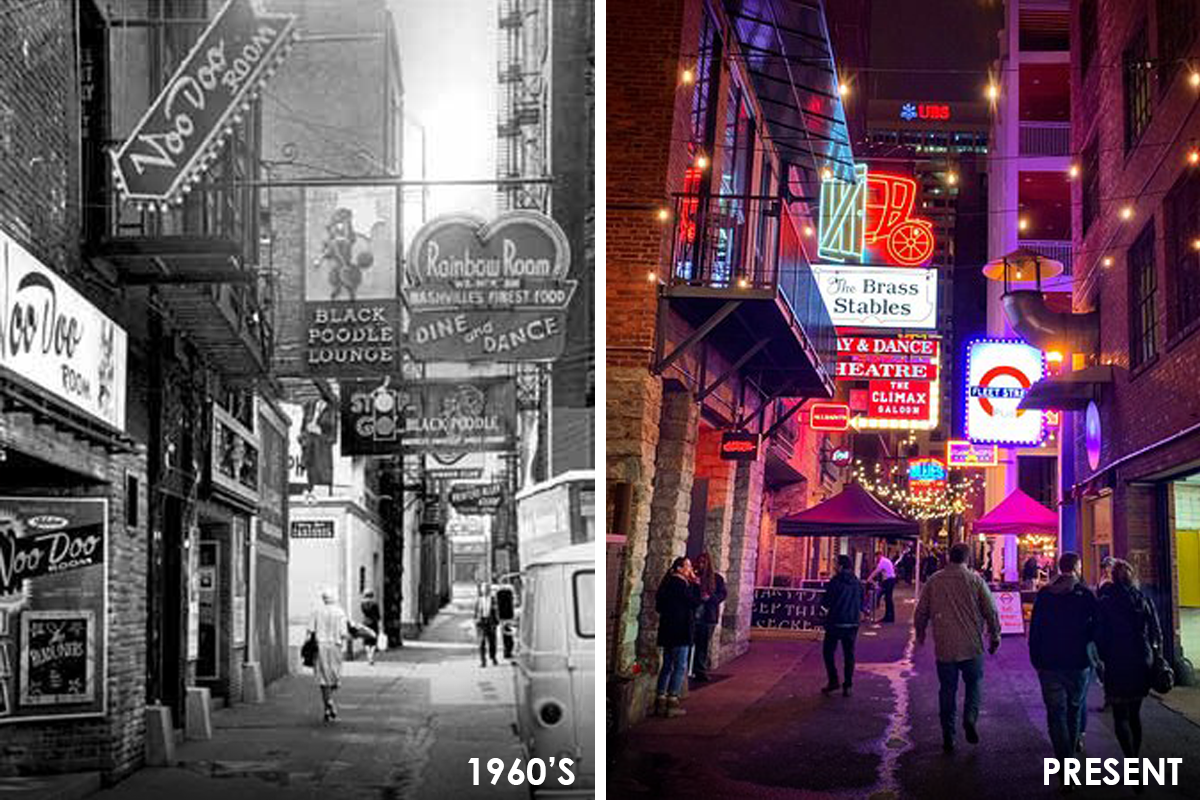 Named a National Register Historic District, Printer’s Alley’s gets its name from the buzzing newspaper industry it contained during the late 1800s. At one time, more than thirty-six publishers, including The Tennessean and The Nashville Banner, called the area home. Its other early nickname, “The Men’s District,” came from the cafes, gambling parlors, and speakeasies that opened to accommodate the printers and members of the local elite. Things that were illegal in other parts of the city were given the blind eye, including the sale of alcohol which was outlawed at the turn of the century. Reporters asked Nashville’s mayor, Hilary Howse, if he was protecting the bars in the Alley. “Protect them?” he said. “I do better than that. I patronize them!” Fast forward to the 1940s-70s when the warm glow of neon from nightclubs like the Black Poodle Lounge and David “Skull” Schulman’s Rainbow Room mixed with the sounds of young musicians making their mark. Performers included Waylon Jennings, Hank Williams, Boots Randolf, and an Army private, named Jimi Hendrix, who would travel from Fort Campbell with his guitar. Over the years, many now legendary establishments like live music staple Bourbon Street Blues and Boogie Bar (where Steven Tyler has been known to give surprise concerts) and Ms. Kelli’s Karaoke Bar opened to host new generations of people looking for a good time in the heart of Music City. 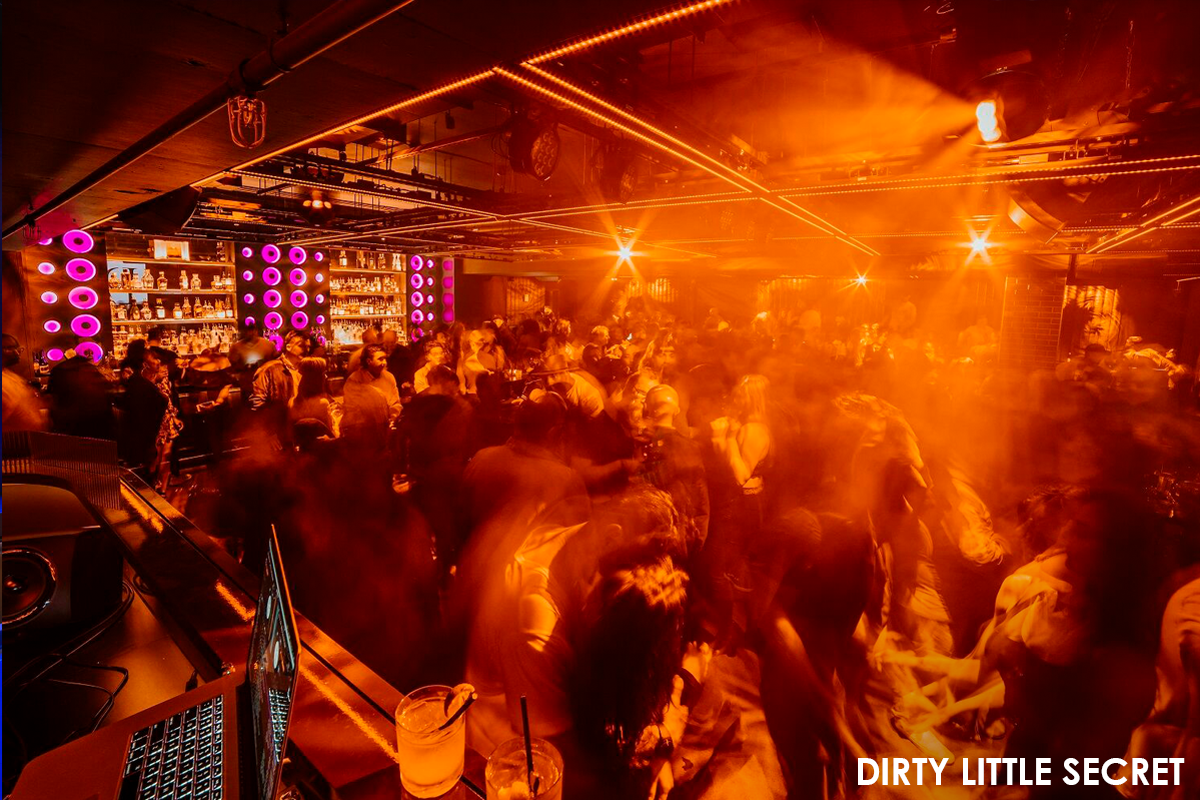 Thanks to private investment, new stores, bars, and restaurants maintain the integrity and character of much of this history through details large and small. Many of the neon signs that light the alley are either restored or replicas of the originals. The 1800s-themed Black Rabbit speakeasy harkens back to the Prohibition era with craft drinks and a weekly cabaret. Dream Nashville has reimagined two historic landmarked buildings while maintaining the celebrated history of Printer’s Alley with unique entertainment and retail offerings. Snitch, an elegant yet refined dive bar, focuses on signature libations with eclectic live music, 7 nights a week. If the original stone walls could talk, they would howl a liquid ode to Nashville’s infamous hideaway for gamblers, bootleggers, and late-night frolickers. Look a little harder to find Dirty Little Secret, a seductive nightclub hidden amongst the shadows of Printer’s Alley. Find the passageway through AllSaints, an edgy, high-end fashion retailer. Nestled in the brick walls of the alley you will also find Easy 8’s, the perfect place for a late-night bite. Late-night icon Daddy’s Dogs opened its second brick and mortar location, serving up frankfurters topped with bacon, cream cheese, and jalapenos to concertgoers from a literal hole in the wall. The Sinatra Bar and Lounge, a restaurant themed after “Ol’ Blue Eyes” himself, is set to open in early 2020 with a menu inspired by the “Chairman of the Board’s” favorite Italian recipes. 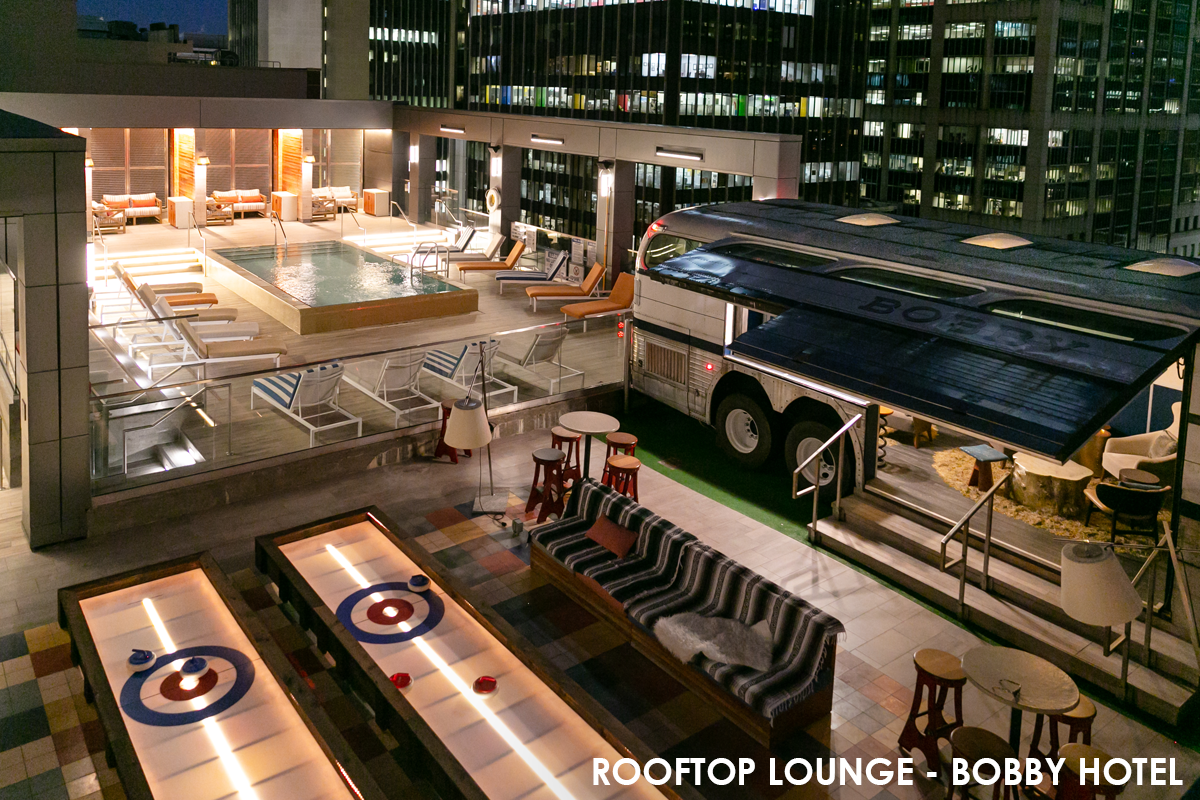 Experience ALL of Printer’s Alley

Despite its small size, Printer’s Alley offers a wide range of experiences. You can start your afternoon with a relaxing massage at Day SPAtacular. Then, update your wardrobe with eclectic hats, clothing, and accessories, made by local artists, at the Keep Shop Boutique. If you’re hungry, enjoy a made-from-scratch shepherds pie from The District Bar and Kitchen, or freshly caught fish and seafood at Sea Salt. If beer is your thing, try a local draft while listing to live music at Alley Taps or visit Fleet Street Pub for a real taste of London. Ready for cocktails? Check out Bobby’s Rooftop Lounge where you can sip craft concoctions in a retrofitted Greyhound bus under the stars. End the evening with a toast to “Printer’s Alley’s Mayor” at David Schulman’s now reopened namesake, Skull’s Rainbow Room. Lastly, if you want to remember your night forever, you can get a tattoo of the famous archway sign at Nashville Ink. 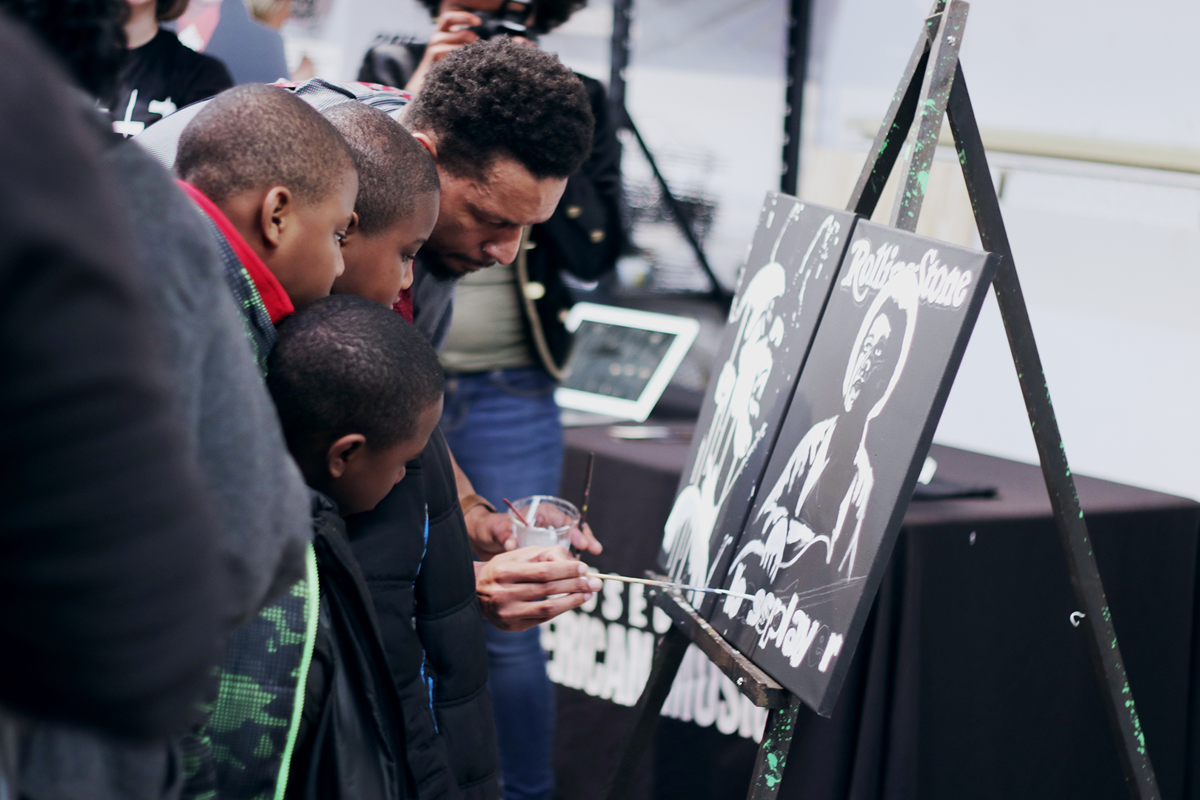 Crawl Your Way There

If you want to explore another side of Printer’s Alley, join us on the first Saturday of every month for the FirstBank First Saturday Art Crawl. The Printer’s Alley After Crawl hosts a variety of local visual artists set up outside, throughout the alley. You may even catch a work in progress! Whether with us or not, make sure you plan your next trip downtown to include Music City’s not-so-hidden gem.

Do you own or manage a business in Printer’s Alley that didn’t make our list? Please let us know so we can include it!