Designed by the Nashville firm of Marr and Holman, under the direction of the Supervising Architect of the General Services Administration, David Allan Thorn, construction of the Kefauver Federal Building began in 1948. The building was occupied in 1952. It is typical of the Modern style promoted by GSA in the late 1940s-50s. The nine-story annex to the building was completed in 1974. The building was named in honor of Tennessee Senator Estes Kefauver, who served in the US House of Representatives from 1939 to 1949, and as Senator from Tennessee from 1949 until his death in 1963. Kefauver also ran as the Democratic Vice-Presidential nominee with Adlai Stevenson, losing to the Republican ticket of Dwight Eisenhower and Richard Nixon in the presidential election of 1956. 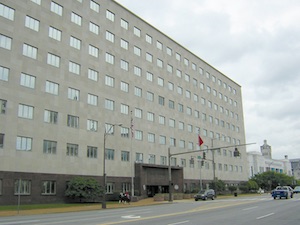