In 1784, a site of four acres was set aside in the original town plan for a public square and public buildings. This area served as the center of Nashville’s public life for over a century. The city jail, stocks, City Hall, and Market House were all located here at one time, regularly bringing farmers, politicians, lawyers, and merchants to the square.

The fifth courthouse to stand on its current site, the Davidson County Courthouse is one of the few buildings in Nashville to illustrate Art Deco detailing. It also carries reference to Greek Classical architecture, seen in the Doric colonnade rising through four stories, which symbolizes America’s political and cultural foundations. The restrained combination of Art Deco and Classical architecture exemplifies the New Deal architectural style known as PWA Modern; the Public Works Administration funded several government projects in downtown Nashville. Rene Chambellan’s sculptures on the exterior embody American principles such as loyalty, strength, and justice while murals in the lobby by Dean Cornwell represent Industry, Agriculture, Statesmanship, and Commerce. This building houses the offices of the mayor, city council, and county courts.

The Public Square, once central to Nashville’s public life, was nearly lost over time due to road expansion and the closure and subsequent demolition of the retail establishments that formed the square. During the 2005-2006 rehabilitation of the courthouse and the construction of the Founders’ Building to the southeast, the Public Square was reclaimed as greenspace. The Founders’ Building provides a unique view of downtown along with panels and photographs interpreting the history of the Courthouse and Public Square. 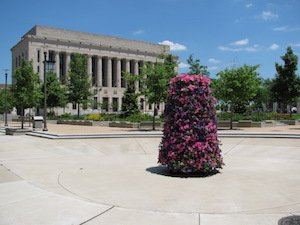