Directly across First Avenue is Riverfront Park, created in the early 1980s to commemorate Nashville’s river history. In the 1780s, Nashville’s first settlers came both over land and via the river to settle here along the Cumberland River. Those settlers built a two-acre fort around a freshwater spring and tucked among the cedar trees on the river bluff. A 1930 replica of that first settlement, Fort Nashborough, stands north of Riverfront Park in Bicentennial Park. Also located in Bicentennial Park is Alan LeQuire’s statue of Timothy Demonbreun, an early French Canadian fur trader who settled here, and Puryear Mims’s sculpture of town founders James Robertson and John Donelson. Across the river, but highly visible from Broadway, sits Alice Aycock’s monumental sculpture Ghost Ballet for the East Bank Machineworks, installed in 2007. The artist’s concept combined elements from the industrial heritage of the east bank as well as the modern driving energy of today’s city, and symbolically connects the east bank to the west, unifying the city. *Reconstruction of Fort Nashborough is in process: creating a modern interpretation of the frontier settlement. 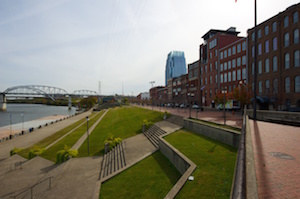