Second Avenue in the 21st Century: On Christmas day in 2020, a bomb was detonated in the heart of historic 2nd Avenue downtown. Miraculously the explosion did not fatally injure any victims, but the historic facades of Nashville’s first “Market Street,” were severely damaged. The city continues the hard work of rebuilding Historic 2nd Avenue back better than before. For more information, visit 2ndavestrong.org.

Market Street, as it was known until 1903, contains the best concentration of Victorian commercial facades in Nashville. Most of the two- to five-story buildings date from 1870 to 1890 and served as warehouses and storefronts for goods shipped along the Cumberland River. The trend toward reuse and renovation of historic buildings has continued here since the 1970s, where shops, restaurants, galleries, and residences have appeared in formerly empty or underused buildings. Especially noteworthy is the Silver Dollar Saloon, now part of the Hard Rock Café, on the corner of Second Avenue and Broadway, which served as an entertainment venue for riverboat workers docked at the wharf at the foot of Broadway. 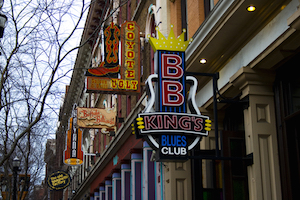