Originally constructed in 1970 as the headquarters for the National Life and Accident Insurance Company the National Life Building was at that time, Nashville’s tallest building. Bruce Graham of the national firm of Skidmore, Owings and Merrill was the designing architect. In 1982, the building was renamed the American General Center following the purchase of the National Life company. The reinforced concrete building is clad in Travertine marble and features a large plaza along Seventh Avenue North. The state of Tennessee purchased the building in 1994 for office space, and in 1999 it was named the William A. Snodgrass Tennessee Tower. It now houses the offices of the Secretary of State and the Department of Tourist Development, among others. An easily-viewed feature in the Nashville skyline, the Tennessee Tower formerly featured lighted messages in its windows at night. 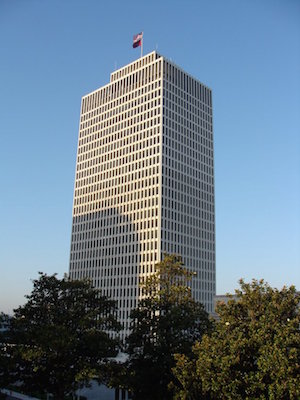