This historic 2nd Avenue building was renovated in 1986 from a warehouse into loft units with exposed brick walls and 12-foot ceilings. Each unit has an outstanding view of either the Cumberland River, downtown Nashville or the four-story park-like atrium. The rooftop is a popular spot for parties or just watching the sunset over the city. Converted from apartments to condos in 2005.

Historic Information:
The building at 178 Second Avenue North was built around 1890. It is a four-story brick building with stone window sills and has metal letters spelling THE QUARTERS on the front façade between the first and second floors. The origin of the namesake is unknown. Like many of the old Market Street buildings, 178 Second Avenue N was originally designed for industry and wholesale marketing. During its first century, the building was used as a harness factory, a warehouse, and a wholesale provider of hardware. The building was first converted into apartments in 1986, leaving retail space on the first floor. The apartments were renovated and turned into condominiums in 2006. The condos have views of downtown on the west and the Cumberland River on the east. Currently, the ground level is home to the Quarters Market. 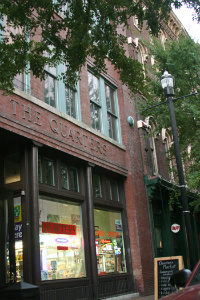