Tootsie’s Orchid Lounge, a Nashville country music institution and world-famous honky-tonk, has operated across the alley from the Ryman almost continuously since 1960. Its proprietor from 1960 to 1978, Hattie Louise “Tootsie” Bess, bought the lounge called “Mom’s” and named it for herself. According to tradition, a painter mistakenly painted the exterior orchid purple. The color was never changed and became Tootsie’s signature color. Over the years, she served such famous customers as Kris Kristofferson, Faron Young, and Willie Nelson when they were still up-and-coming artists, and Tootsie was well-known for her generosity toward struggling musicians. The photo- and memorabilia-lined walls are called “Tootsie’s Wall of Fame.” A portion of the Loretta Lynn biopic “Coal Miner’s Daughter” was filmed inside Tootsie’s. 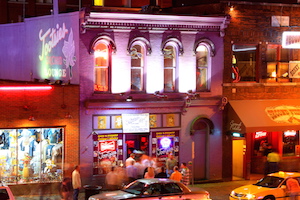